Our last encounter was at the Riverside back in October last year and saw us comfortably beat the visitors 2-1 with goals coming from Johnny Howson and Chuba Akpom assisted by George Saville, this time round Barnsley are a different gravy, in form and firing on all cylinders, whereas we have been all but written off with injuries to key players across the park.

Sam Morsy will be a huge loss for this fixture in particular, he joins Dael Fry, Marcus Tavernier, Anfernee Dijksteel and Marcus Browne in the treatment room with Britt Assombalonga seemingly still out of contention with a proposed move to pastures new in the summer. No doubt he’ll be picking out colour swatches from B&Q over the weekend!

Top Tip: when the missus picks out the Farrow & Ball get your self straight to the mixing desk and get them to knock some look-a-likey paint out at a fraction of the cost.

The rippling torso of Barnsley are the darling buds of an on paper victory, their fans must be rubbing their hands with glee at the prospect of facing a down trodden, bloodied Boro, on the ropes and all but defeated in their chances of a playoff place.

Credit must go out to Valérien Ismaël, a young and innovative coach who seems to have really clicked just at the right time, facing us at home on the back of two victories.

GK Bradley Collins – he’s no great shakes, his distribution is poor in my opinion and his stats are very much bolstered by the two Prem quality ‘moneyball’ behemoths in front of him. Let's have a go man, get at him! 6ft former Chelsea soft lad.

CD Mads Andersen - stone cold, day in day out top performer he’ll be a tough cookie to crack, we need our top guns against this lad, the best of the best. No flying rubber dog sh*t outa Hong Kong with this one.

CD Michal Helik – oh my days! another solid, solid hard case performer, but like his partner in crime he could be fallible to a few switcheroos if caught in possession.

CD Toby Sibbick - I would say he is their weak link, 21 year old, eight league starts, lacks a bit of concentration on the right side of defence we need left sided/left footed players to give this kid pure hell. No mercy!

RM Callum Styles – young 5’6 can dribble for days and is very much in demand from the bigger clubs. Handle with care. He can do it all. Don’t let his diminutive stature fool you.

Don’t let him get the ball unattended and don’t take him for granted going against him.

LM Callum Brittain – has made the step up from league one with ease.

AM Cauley Woodrow – an absolute gem of a player and probably the sweetest left peg in the Championship right now. He picks up yellow cards on the reg might need to watch out if he crosses paths with the combative FMTTM sponsored Darnell Fisher.

AM Carlton Morris – what a name! he defo dances along ‘it’s not unusual’ in a sweater vest it’s a shame he’s been a pure don in the Champo mind. He gets goals at a frightening rate.

ST Daryl Dike - 7 in 13, 4 out of the last 4, transferred in from MLS team Orland City he looks like the hot topic, a born finisher. Let’s just hope he’s just another flat track bully who flatters to deceive..

Barnsley cannot afford to slip up, placed fifth at the moment with Bournemouth breathing heavily down their necks. What have we got to play for? some would ask. Even the most optimistic Boro fan would say the fat lady hasn’t quite sung yet but she’s certainly warming up with her scales, but wait.. what’s that I hear in the distance

This is where we shine, when the chips are down and the odds are against us, we rise to the challenge of our rivals let us not forget where we came from, let’s not forget what we are all about. We were made for this game and at 200-1 for promotion I for one still fancy us for this, they could well be the last opponents we face this season that have something to play for.

Barnsley will set their team up with three at the back and press high up the pitch with considerable talent up top, our injuries to key players such as Dijksteel, Tavernier and Fry mean that our shape has been compromised (to me at least) but playing 4-2-3-1 and the old rope a dope won’t cut it I’m afraid, we need to match them and go toe to toe with 3-4-2-1 and we’ve got to have energy and drive coming off the bench after the first hour because these lads have quality in their side to be able to make changes without even breaking a stride.

This could be the last team we’ll play this season with something to play for and he need to go at it hammer and tongues no letting. Does it all hinge on Hayden Coulson? No, but I love him me, I think he is quality and want to see him stick with us next season. A few players might have their nose out of bent with this game, but we need to have Prem quality coming of the bench.

They maybe a different gravy but we’re bringing the toby carvery and our massive Yorkshire pudding can take anything their boys have to pour on us. Where are gonna be the key battles in our game tomorrow?

Sibbick Coulson – unpredictability could be our saving grace

Styles Fisher/Spence – this is where we win or lose. Spence off the bench

Mowatt Howson – experience wins out man, take him to school!

Woodrow* McNair – he needs to watch himself and not be turned.

What have we got? Left footed players exploiting the weaker right side of their defence.

See that? This is the favourite thing that I have on this Earth. And Rocky Marciano give me that. You know what it was? His cufflink. Huh? And now I'm givin' it to you and it, it's gotta be like a, like an angel on your shoulder see? If you ever get hurt and you feel that you're goin' down this little angel is gonna whisper in your ear. It's gonna say, 'Get up you son of a bitch 'cause Newy loves you'. Okay? 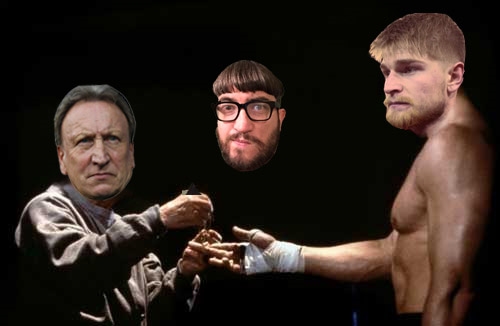