I think I'll avoid the whole thing and watch it all in one when it's finished.

Is this a new series Randy?

Erimus74 said:
Is this a new series Randy?
Click to expand...

Been trying to scrape in the last 3 series since Friday, I got up to series 5 episode 2 before the football started.

Dunno how I’ll cope having to wait a week for each episode!

Series 6. Can the wooden characters unmask H this time around and how convoluted will it be if they do

Surely they've worked out by now that H lives in Sandbanks.

Nero said:
I think I'll avoid the whole thing and watch it all in one when it's finished.
Click to expand...

We did that with series 1-5 in a month. Our household was late to party much like we were to Game of Thrones, The Walking Dead etc.
B

It's there a good recap video anywhere? Feel like I need a refresher. A Beginner's Guide to Line of Duty

BurneoFunction said:
It's there a good recap video anywhere? Feel like I need a refresher.
Click to expand...

I've not watched the video, but I assume this covers it.

A Beginner's Guide to Line of Duty

Thought series 5 quite a lot a plot was convenient. Felt a bit like lazy writing at points

It‘s been consistently brilliant for years imo. Think I smashed through the first three series while I was away with work, and I remember ending each episode thinking .’No way! Didn’t see that coming!’ before starting the next episode, when I should have been asleep

You are going down fella...

Thanks for the heads up, set up on recording link

I’ve said for a while H is Arnott’s old boss in series one in the Counter Terrorism squad, Osborne, played by Owen Teale.

This is what the QR code from the trailer gave you. 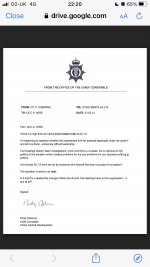 Could be right lefty. Can you get a bet on? x

I love line of duty. Just about the only thing I will watch on BBC (still doesn't justify me licence fee).

I thought the last season was probably the poorest. I say 'poorest' but still far better than anything else on TV. Just think the whole H thing is almost done to death.

That said still gripping stuff. Already plenty of twists with only one episode down

. Basically everything you see can and probably is a massive misdirection and will be the complete opposite when you see them all.

I really struggle with this one episode a week. I am fully used to binging all at once. I usually record them all and watch all at once but it's impossible not to see spoilers for LOD as its everywhere. So watching them as they go out.