Where is your favourite place in Middlesbrough?

It was also one of mine Never a dull moment in there!

WilderBall said:
My office used to be in there.. Boho Four. It was recently purchased by Steven Black, owner of GB Bank, which has just launched and is HQ'd in Middlesbrough.

good to see wickers world getting renovated, whats the plan for the building?
W

jam69 said:
good to see wickers world getting renovated, whats the plan for the building?
Click to expand...

Commercial setting.. bar/restaurant I'd guess. Much needed renovation isn't it... Kalinka has been shut for years now, and it's a beautiful building. A lot around that area are.

They're well underway with it.. it's completely wrapped at the minute with scaffolding up. Due for completion in July.

To pick one favourite is a toughy. But here's my top 6... 1) Stewarts Park 2) Eston Hills 3) Ayresome Park and surrounding areas (used to walk round with my great grandad and he'd tell me loads of stories of when he grew up around there) 4) Dorman museum (another place i'd go with my great grandad) 5) Fleetham Street (where my great nanna and grandad lived in the 80s) 6) Albert Park

Another call for Marske beach, especially on a clear winter’s day.
F

jam69 said:
good to see wickers world getting renovated, whats the plan for the building?
Click to expand...

Commerce House the old Bank on the corner is behind the renovation - the buildings will be linked to the rear. It will be retail downstairs and office upstairs. Timed to coincide with the next phase of the Railway Station works - the old Cornerhouse is being converted into two office spaces (already taken) but externally it will retain all the old features and in fact have bottle green window frames, as a nod back to Winterschadens wine merchants that was based here for many, many years.
There will also be a new station entrance directly off Zetland Road. The tunnel entrance from Bridge Street will continue straight through and under the station to Zetland Road, with sliding glass doors.
There are a couple more phases of work on the station including increasing capacity to double the trains to Newcastle and for increased traffic to London. A new passenger platform to the rear of the station will be built.
Building work is already under way as you can see by the scaffolding.
Have you noticed that the old Slam nightclub has now been demolished. The plan isto open up the renovated Exchange Square from both sides of the A66 and to have a performance stage area - this is already in demand, several events are already in the pipeline here.

Marton Woods.
Endless adventures as a kid in all seasons.
Climbing trees, making Tarzies, damming the beck, making fires.
Not an adult in sight.
Bliss.

James Cook Hospital as both my boys were born there. Followed by Stewart Park as the eldest loves it there.
F

Choice of 3
My back garden. I’m lucky to have an oldish house with a big plot

Top of redcar blast furnace. Worked there twice on shutdowns and had my dinner on the top. Strangely feel privileged to have been up there. First time I had cheese and onion sandwiches (grated cheese on thick white bread) a jammy wagon wheel and an apple.

The top of eston hills just as you get over the top of pigs bank. Middlesbrough with the industry and North Sea on the left and cleveland hills and rose berry topping on the right. Eston nab in front.

On a side note, I can’t believe how many people from Middlesbrough haven’t been to eston nab. If you haven’t then you really ought to spend an afternoon doing it.
R

Whenever I return to England I always pay a visit as it brings back so many fond childhood memories and
lessons that would never leave me.
My sister and I used to go to my nans house straight after school as my parents weren't home from work yet.
My grandad was a union delegate at the steelworks and I remember his coming home from work and my nan
would usually say that she will put the kettle on. He would often say, don't bother pet, I'll take the kids for a walk.
My sister and I knew exactly what that meant, we were going door knocking.
Some poor soul had had an accident at work and little did we know at the time, there was no such thing as workers
compensation, but never fear, grandad was here.

He would knock on the doors, and I am sure that he used us as a softener up technique as the householder would always
greet us with a big hello with a touching of my sisters or my cheek and tell us of how much we looked like our mam or dad.

They would almost always say things like sorry A..... I haven't got much or I've got nowt but they always came back with something.
Sometimes it was a few pennies, a few potatoes, tin of spam or a packet of PG tips. On one occasion, a man that was blind in one
eye hurried across the road and came back with a cabbage. Another old man started to cry when he told my grandad that he
really did have nothing to give.
After he closed his door I asked my grandad why was he crying? He replied, you'll understand one day son.

My sister and I dragged around an onion sack each until we arrived at the injured mans house. His wife answered the door
and the man arrived on crutches and there was more rubbing of cheeks and thank yous and tears.
It didn't make any sense to me as a seven year old that the people that were giving and the people that were receiving
were both either teary or crying.
Why is everybody crying grandad?
Once again, the response, you'll understand one day son.

There's more to beauty than meets the eye in places that you least expect.

WilderBall said:
Commercial setting.. bar/restaurant I'd guess. Much needed renovation isn't it... Kalinka has been shut for years now, and it's a beautiful building. A lot around that area are.

They're well underway with it.. it's completely wrapped at the minute with scaffolding up. Due for completion in July.
Click to expand...

Would be great to see the buildings facing exchange square towards (for those old enough) Rumours Nightclub changed to commercial use. It's the best part of the town centre and would be a great addition to our nightlife. Not that it would help me.

Good to see another advocate for Eston Hills, and I totally agree, it's an amazing vista and sums up Teesside and North Yorkshire (you can see the river, the sea, the industry, the changing residential landscape as you look further down the bank, the Riverside, Hartlepool Nuclear Power Station and the wind farms etc in one direction, turn the other way and you have Roseberry Topping and Captain Cook's Monument and all the beautiful countryside).

A left-field one for me is Smith's Dock Park and the lines as I spent many a happy day playing there as a child.
J

In the past it was the first glimpse of the floodlights on the way to Ayresome. If I remember well it was somewhere on Park Road South that you saw them.

Stood on top of Roseberry Topping at sunrise (also at dusk). You can see everything around. I've not been up for a couple years but that view is unreal.

We used to go up there in the pitch black and just look out. Think I will go up next week and just enjoy.

Eston Nab is also up there.

Ormesby Hall fascinates me, because of its long history, the saxon church, the surrounding woods (before the Parkway was built and that and my friends played in) how its land connected the mines and iron/steel making. the politics and interests of the family that lived there in the 1920s to 1960s. Its connections with the village that existed 150 years before Middlesbrough, but is part of Middlesbrough.

Some good suggestions on here, but Middlesbrough for me were places with the name in its address.

In central Middlesbrough - the Dorman Museum, Cenoteph and the gates and walls to Albert Park. As a child I stepped into a different world in that area - the park was an adventure playground with lakes, swans, fountains, skating rings, miniature steam railways, the museum took me to Africa, the walls of the park contained the names of some of my dead relatives, later as a teenager and young adult the Cenotaph meant Football, where I was dropped off and picked up from Boro games.

I like lots of parts of Middlesbrough and grew up in Acklam. Lots of fun, beck jumping and hanging around the shops and the community centre behind Trimdon shops. Me and my mate would go on a Tuesday night when old peoples dancing was on (early-mid 80s) and open the door for the old folk going in and out. Hoping to get 10p so we could go to the shops and buy sweets.

As a photographer now, I see beauty in lots of scenes, both industry and park land. However, for my fix, I need to go to Saltburn and just sit on a bench and listen to the waves, walk along the pier, and generally people watch. We are so lucky to have so much on our doorstep. 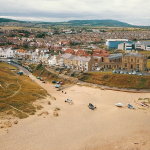 Marske beach. A quiet haven between Redcar and Saltburn.

A difficult question as some of the places that come to mind no longer exist eg Cannon Street and the old Newport Road. After moving from Cannon Street at the age of 5, the still unfinished Park End was like being moved into the deepest countryside. The beck, Pennymans Wood, Ormesby Station (now Marton) and the Grove with it's entrance to Stewart Park. I'd be out all day with my border collie Shap just exploring this new playground.
You must log in or register to reply here.
Share:
Facebook Twitter Reddit Pinterest Tumblr WhatsApp Email Share Link
Top