It's really a nuisance on mobile and tablet, and it certainly feels much more frequent than once an hour. I've been on the site far less since these ads were introduced

I suppose that's a consequence of having to use the forum as income/generate revenue rather than just a hobby, I'm sure it would be ad free if that were the case. Similarly if ads are there because the site costs that much to run; it shouldn't as other sites demonstrate. That said i don't think Rob labels himself as a businessman to be fair to him, so his forte may lie elsewhere and this is just a 'side hustle'
Last edited: Dec 30, 2021

Erimus74 said:
I dont mind TBH, its keeeps me informed of what my wife is thinking of buying next
Click to expand...

Aye, I bet that's what you told them down the PC Repair shop, to explain all the pop ups for gimp masks and butt plugs

Erimus74 said:
I dont mind TBH, its keeeps me informed of what my wife is thinking of buying next
Click to expand...

I just got one "thinking of a divorce?" plastered full screen
She'd have been over the moon seeing that!

It definitely isn't once an hour. Not on my android phone anyways if that helps Rob get to the bottom of things.

As Artie has mentioned, it's kept me away from the forum for a bit longer than usual (which I imagine some will be elated about

RedAsABeetroot said:
Rob had commented on another thread that it should only be once per hour.
Click to expand... 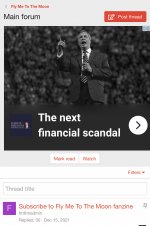