They must be baking in there.

Went for a walk with my new girlfriend and we saw dogs mating.

She said: "How does the male know when the female is ready for sex?"

I replied: "He can smell she is ready. That's how nature works."

We then walked past a sheep field and the ram was mating the ewe.

Again my girlfriend asked: "How does the ram knew when the ewe is ready for sex?"

I replied: "It's nature. He can smell she is ready."

We then went past a cow-field and the bull was mating with the cow. My girlfriend said: "This is odd. They are really going at it. Surely the bull can't smell when she is ready?"

I said: "Oh, yes; it's nature. All animals can smell when the female is ready for sex."

Anyway, after the walk, I dropped her home and kissed her goodbye.

She said: "Take care and get yourself checked out for Covid-19." Surprised I said, "Why do you say that?"

She replied: "You seem to have lost your sense of smell."

I had eczema, diarrhoea and haemorrhoids over the weekend...

My best game of Scrabble ever.

What did yoda say when he saw himself in 4K?

FatCat said:
What did yoda say when he saw himself in 4K?

First decent dad joke for ages there fatcat but you have to say hdmi in your head. 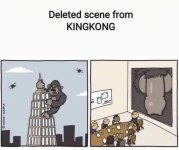 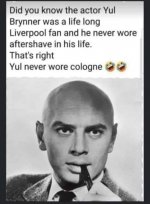 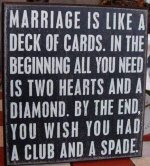 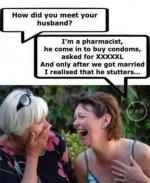 The extension of that is: sex is like bridge. You either need a good partner, or a good hand

No one believed the designer of the titanic had a lisp. It was unthinkable 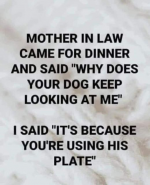 My Nan hates her new stairlift - says it’s driving her up the f in wall.

FatCat said:
My Nan hates her new stairlift - says it’s driving her up the f in wall.
Click to expand...

I offered my neighbour £10 for a go on her stairlift.

A man walks into a bar, and sees a huge jar sitting on the counter.

The jar is stuffed with $10 bills. There has to be at least twenty grand in there. Curious, he approaches the bartender.

He asks, "What's the deal with the jar?"

The bartender replies, "You put ten bucks in, and if you complete three challenges, you win the entire jar."

"What are the challenges?"

The man's feeling game, so he fishes a ten-dollar bill out of his pocket and stuffs it into the jar. "Tell me," he says.

"Okay," the bartender says. "First, you gotta drink a whole bottle of tequila in sixty seconds or less, without pulling a face or puking.

"Second, there's a large and angry pit bull chained up out the back. It has a bad tooth. You have to pull that tooth out with your bare hands.

"Third, there's a 90-year-old lady upstairs who's never had sex in her life. You have to go up there and nail her."

The man is stunned. "You'd have to be crazy to attempt all of that." "It's up to you," the bartender says, "but your money stays in the jar."

Well, the night goes on and the man has a few drinks, and he keeps looking over at the jar, until finally he gets back up says, " I'll do it! Hand me that tequila!"

The bartender hands the man a bottle of tequila, which he unscrews and chugs down in under a minute without making a face. He throws the empty bottle to the ground and charges drunkenly out the back door, where he sees the chained-up pit bull.

From inside the bar, the bartender hears growling and barking and snarling and screaming, and then silence.

The man staggers back inside. His clothes are ripped to shreds and covered in blood, and all over him are cuts and scratches and bite-marks.

I just found out I'm colourblind.
The diagnosis came completely out of the purple! 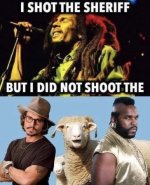 A cowboy, who just moved to Wyoming from Texas, walks into a bar and orders three mugs of Bud.

He sits in the back of the room, drinking a sip out of each one in turn.

When he finishes them, he comes back to the bar and orders three more.

The bartender approaches and tells the cowboy, "You know, a mug goes flat after I draw it. It would taste better if you bought one at a time..."

The cowboy replies, "Well, you see, I have two brothers. One is an Airborne Ranger, the other is a Navy Seal, both serving overseas somewhere.

When we all left our home in Texas, we promised that we'd drink this way to remember the days when we drank together.

So I'm drinking one beer for each of my brothers and one for myself."

The bartender admits that this is a nice custom, and leaves it there.

The cowboy becomes a regular in the bar, and always drinks the same way.

He orders three mugs and drinks them in turn.

One day, he comes in and only orders two mugs. (I know, a tear is coming to my eye too)

All the regulars take notice and fall silent.

When he comes back to the bar for the second round, the bartender says, "I don't want to intrude on your grief, but I wanted to offer my condolences on your loss."

The cowboy looks quite puzzled for a moment, then a light dawns in his eyes and he laughs.

"Oh, no, everybody's just fine," he explains, "It's just that my wife and I joined the Baptist Church and I had to quit drinking."

"Hasn't affected my brothers though"

Why did the hedgehog cross the road?

To see his flatmate.

A Teesside a mackem and a Jamaican are waiting outside the maternity ward for news of the birth of their children.

A nurse comes out "I'm really sorry but there's been a terrible mix up and we don't know which baby is which" she says. "Do you think you'd be able to go in and try and work it out and pick your own baby?"

The teessider goes first and minutes later comes out carrying a black baby.

" Erm, I'm pretty sure that one's mine" says the Jamaican.