Earlier in the season Celtic were in danger of coming third in a two horse race.

I want to buy our away top now, but don't want 32 red splashed across it. Can you buy them without the sponsorship?

For 2 clubs that qualfy for Europe year in year out by default and i still spend longer out tbere when i book through TUI.
They both seem to forget that 'insignificant' Boro have been in a European final since than both of them.

Most Boro fans have seen the signing as a decent one, a "let's see he's got potential" type. Hardly gloating en-masse we've signed the new Platini, filling Celtics MBs with cheeky comments.
Seems Celtic fans have created an issue where there isn't one. Small minded mentality.

Just look at how Celtic fans reacted to Brendan Rodgers leaving for Leicester. It's a strange one with Celtic and Rangers. Both are definite big clubs, but outside of their minor league they're nothing compared to other genuine big clubs.

It's funny that a mischievous tweet from the Boro media team has them so riled up! Count to ten and have a bit of perspective Celtic fans!

An adequate response to Celtic bitterness would be for McGree to do the business on the pitch and I know I’m in a minority probably but thought the tweet a little unnecessary.

He’s missing out some great games mind ( I’ll admit I had to google to see who was in the spl).

How many trophies would we have won has we been in the Scottish premiership?

This is the reality of the spl league as the league 2 and even the conference gets bigger gates than some of these sides. 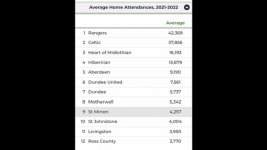 Cardiffdaffs said:
An adequate response to Celtic bitterness would be for McGree to do the business on the pitch and I know I’m in a minority probably but thought the tweet a little unnecessary.
Click to expand...

We need to win the FA cup so that if Celtic are good enough to drop down from the Champs to the Europa league, we can possibly play them.

As for the tweet, it was aimed at Boro fans. The only Celtic fans to see it would be the ones looking for Boro tweets.

Compared to our second tier 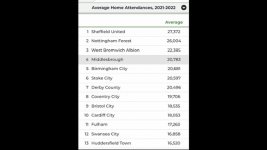 Haha .. it's funny reading it on Twitter ... I must admit, I'm taking a break from my usual "Prod A Geordie" escapades and having just as much fun prodding them too .. They really do seem to think that McGree is missing out by not winning trophies vs the Angus Cow Market's first 11 ..

Rauko said:
They really do seem to think that McGree is missing out by not winning trophies vs the Angus Cow Market's first 11 ..
Click to expand...

Next season he could be testing himself against Man U, Man City, Liverpool, Arsenal, Tottenham, Chelsea, West Ham, Villa, Leicester and possibly Leeds and Newcastle twice a year. Compare that to playing Ross County on a wet Wednesday night and going out of Europe before Christmas. There is just no competition.

Morton94 said:
I didn't know Celtic fans were so bitter

Only the bitterest in the world

Wouldnt be any fuss if say forest, sunderland or even fulham signed him.. its cos its little old boro we are an easy target to mock.
F

I’m surprised at Celtics low average. I genuinely thought they were closer to 50000.

NorthumberlandBoro said:
How many trophies would we have won has we been in the Scottish premiership?

Facefuzz said:
I’m surprised at Celtics low average. I genuinely thought they were closer to 50000.
Click to expand...

...and that 50k thing is a fairly recent phenomena, it's only really happened in the last 25 years. In the 80s they regularly had crowds of 14-18k

S7DiscoDown said:
The argument about European football lasts about 6 weeks then they are out. Even less for champions league.

I think in right in saying we've been to a European final since they have?

I am pretty sure even the most staunch Celtic fan can see the Champo is a higher standard league. Thats not even including the fact you could end up in the prem through promotion.

The SPL has crowds under 10k and some played on artificial pitches. I'm sorry but it's simply not a big pull. Clearly Celtic are massive...yet its not the big pull when you are playing football week on week out. The standard is shocking.
Click to expand...

Don’t get too carried away, if Warnock was still here we’d have crowds below ten thou!

Steer said:
Why do they think that signing this bloke that I have never heard of is the highlight of our season? Why do they feel so much hurt over this.
Click to expand...