SuperStu said:
I don't see how anyone could find it "confusing" tbh.

The best way to get Payero used to the Champo is for him to play Champo matches.

The best way for Boro to accrue points in the short term is to use the team Warno thinks is most ready for matches here and now.

Those are the conflicting but obvious realities the manager has to work around.
Click to expand...

Can’t be anymore simple, he isn’t practicing what he claims is the best way of getting experience in the division. There lies the confusion.
S

Nosmo-King said:
Can’t be anymore simple, he isn’t practicing what he claims is the best way of getting experience in the division. There lies the confusion.
Click to expand...

But the reason why is obvious no?

The best thing for Connor Malley is to be playing championship matches too. That's obvious isn't it? Whether Warno comes out and says it or not. But nobody would expect him to play week in week out for the rest of the season.
N

I tell you what is obvious why say something you believe in and don’t then practice it? And, to date, there has been some selection and positional decisions that have raised eyebrows. I was a big fan of Warnock but since January he has rarely covered himself in glory.

theredrooster said:
I think the poster was more making the point that our form since the January window has been poor so this season appears to be continuing the trend.

I agree it is too early to be jumping up and down about it demanding change though, especially with so many new faces, but we need to start to see positive signs of us turning the corner soon.
Click to expand...

We needed numbers in January and the players we brought in were a bit of a gamble we might have seen them in a slightly better light had we reached the playoffs. This summer we’ve had a massive turnover in players leaving a fair few go right down to the wire.. these still need to get up to speed and we’re still left with a few holes in the squad. The money just isn’t there.. we’re wheeling and dealing.

The_Lizards_Jumpers said:
Pity he's not on a par with Pulis for the points he's won.
Click to expand...

Pity he's not on par with the players he had!

newyddion said:
Pity he's not on par with the players he had!
Click to expand...

Yeah Pulis had such superstars as Ryan Shotton, Adam Clayton and Harry Chapman - players that Warnock could only dream of.

The_Lizards_Jumpers said:
Yeah Pulis had such superstars as Ryan Shotton, Adam Clayton and Harry Chapman - players that Warnock could only dream of.
Click to expand...

But he also had Braithwaite, Bamford, Traore, Harrison (to name a few..)

Please remind me, how are those getting on?

Pulis had bamford traore Gibson Ayala Clayton. Most of the team that had finished 4th and then 2nd. He just squeaked the playoffs. Rubbish. Give that team to Bryan Robson and he would have the championship sewn up by Easter.

Sheriff_John_Bunnell_ret said:
But each transfer window seems to make us worse.
Click to expand... 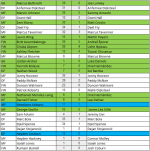 SuperStu said:
I think that's a little unfair. We've had 1 match since the window actually closed. And I think a lot of the new players look quite good.

Maybe at the end of the season we'll look back and think we'd rather have Assomba and Fletcher than Ikpeazu and Sporar. Who knows?

At the moment I think the squad is better now than it was before the most recent window. We kept all the players I most rate and replaced some of the ones I least rated. But it's obviously subjective and I don't know better than anyone else.
Click to expand...

Squads getting better, performances are getting worse. I'm hoping he's just taking time getting to grips with what his best team is, rather than anything more fundamental. Trouble is after Jan there was just too much rotation. Players don't get used to playing with each other or the system when there's constant rotation.

But he also had Braithwaite, Bamford, Traore, Harrison (to name a few..)

Please remind me, how are those getting on?
Click to expand...

Not when he finished 7th he didn't

I'll give you Braithwaite played 17 games that season and Besic most games, but the two squads aren't worlds apart.

pulis had nearly double the current wage bill when we made the playoffs and surrendered to Villa.
He left the club with a bigger wage issue than he inherited and signed as badly as Monk.
Let's have no re-write of that little *****' reign.
pulis got 34 points from his last 23 matches, with 15 of them in the last 6.
Until that death rattle, we were in relegation form and had gone out of the Cup disgracefully at Newport.

Warnock has done the job re re-structuring that pulis said he was going to do.

I've no idea how things will turn out this season, but I think 12 new players needs more than 6 matches.
I'm looking forward to the next few matches and to seeing some new players.

newyddion said:
How does January even come in to it?

How many games have we played since the summer transfer window closed?
Click to expand...

Just random as he'd finally got his attacking reinforcements in and the window had closed. From the beginning of January it is slightly worse.

I used to like listening to him talk about the game when he first arrived, but now I'm getting a little bored and his words come across more and more like excuses. If this is how he has always been I've no idea but the reality is we've been garbage since Fulham, really, and he needs to just be honest. Since someone earlier mentioned Payero, I get this niggling feeling he wanted nothing to do with us signing him, and can't imagine him ever giving him enough time to get fully up to scratch with the pace of this league by giving him enough game time while he's is still in charge. God knows what it is doing to the lads confidence sitting on the sidelines, when he arrived people were expecting a gem, the big signing of the Summer .. all that soon went quiet when the rest arrived

That's just one thing though ..

Then there are the refereeing rants I'm getting bored about. Before he arrived I found it kind of amusing, knowing what he is like with referees but his display up to date is just making us look stupid.

We desperately need to win this game tonight.

I don't want fans to turn on him, genuinely like the guy and was glad he arrived and signed on, thought it was the right move. I didn't expect to start this season as badly as we have though, and can't help but feel we're going to lose tonight. Can picture Grabban scoring, almost tempted to whack money down on a Forest victory plus Grabban to score .. We ended last season miserably and nothing appears to have changed.

Honestly felt confident we'd pick up 4 points min the next two games after the break seeing the opposition. Shows what I know.