Someone give Crooks another carrot.

Same old from us.

Hope the ref's wife leaves him.

Poor 2nd half was really flat

2 weeks in and you can see what he’s after good link up nice tempo and but for the shocking decision we could easily have won that.
I

Fine margins. We'd have been sat in 10th without the ref being a complete whallop.

That being said, a decent display, just ran out of steam towards the end. It happens.

Fuming with that ref.

What a cynical rough house team they were.


Woohoo just seen the first goal, which I missed in real time. Scrappy but who cares.

Anyway, where was I, Yeah, we were better today in the second 45 minutes, didn't give up and still looked much better than millwall.
On balance, it will be interesting to see where we go with Wilder.

Finally, the referee was appalling, and we would have won that with a fair rub of the green.
S

Optimistic for next season.

Beat Preston Preston Win at Huddersfield and that turns into a good point
Last edited: Nov 20, 2021

Smoginexile said:
Optimistic for next season.
Click to expand...

Me too and I am also quite optimistic for this season.

Reportedly the same ref who allowed Blackburn to get away with Fry experiencing a high kick to his face - resulting in a potentially serious injury!
[Check - I could have been misinformed]. 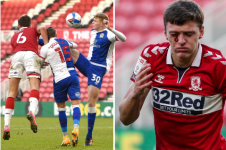 It doesn't look any better with time, that challenge.

zorro_mfc said:
2 weeks in and you can see what he’s after good link up nice tempo and but for the shocking decision we could easily have won that.
Click to expand...