Is out this morning, what do we think?

Currently giving it a second spin. I think the singles are (possibly) the strongest/most direct material but some others will be growers.

It's certainly a ballsy move, to shift even further from their "established base". Must admit I think it's up there with their best work.

ThatFragranceGuy said:
For anyone else confused this appears to be an album by the arctic monkeys
Click to expand...

Going out in my car today, it's a brave move as the wife is the Sat Nag.

What do you mean, what? Where's the ambiguity?
C

Big_Nothing said:
What do you mean, what? Where's the ambiguity?
Click to expand...

If the singles are the strongest/direct tracks it may not be for me. Thought both were pretty boring.

Fair enough, there have been a few reports in Sheffield this morning of people trying to flog their tickets for next year based on hearing the album in full! As before, I'm really not sure how they'll pull off the new songs in a huge outdoor venue but I'm sure they'll surprise us.

For what it's worth I'm slowly coming round to the opinion that "mirrorball" is the best track they've ever done.
B

Yeah I enjoyed mirrorball most, but also like body paint. Not a big fan of I ain't quite where I think I am but it might grow on me. Only listened to the rest once through but liking scupltures and hello you

just read a poor review in the national press
S

I’ve just had the CD posted after buying it for the pre-sale tickets. First CD I’ve owned in years, the only place I can think of using it is the car, funnily enough.

Waiting till after work to sit down and listen to it properly.

I’ve never seen the point in reading or caring about album reviews. Just listen to it yourself and see how you feel afterwards.
U

Wonder how much of the new stuff they'll play? Didn't play much ( or anything?) from Tranquility Base Hotel and Casino at Reading as the songs won't really fit those massive gigs.

Haven't heard it much but I'm looking forward to hearing it and seeing them evolve. The people criticising just want them to repeat 'whatever you say I am.....' or 'AM' (depending on your age!) forever.

Had it on 3 times today, its horrendous in my opinion.
All the songs sound the same, dreary noir rubbish.

I can't see how they'll adapt that to a big stadium event.

Must be weird for them because they'll play their big records, and the crowd goes mad, the songs are faster, louder, crowd go wild for them, sing every word back at the top of their voice and they'll play some of this new dreary slow nonsense and the crowd must switch off, it's very telling in the audience the hit the crowd are into and the album fillers or the songs the band are pushing which just aren't working on a mass level. Obviously not everyone feels the same, but if they were just starting out now and their last 2 albums were their first, they would not be anywhere near stadium tours or as successful as they are now.

Loads of tickets up for resale on Ticketmaster and Facebook now.
Stick to what you're good at, what your fans love, what made you famous and popular.

I don't know why people want them to create the same music they made when they were 19, people grow, expand take on new influences. They've evolved from that band some time ago, and although I still love that stuff I expect each album to be different, if you just want an indie pop-punk Strokes tribute act and no other influences then AM haven't been a band for you for a decade. If you want early AM vibes go listen to The Reytons instead. They're practically an early AM tribute act, but have played the same style of music for the last 5 or 6 years without progressing, they're also from the sheffield area and working class.

Very 70s cinematic feel to the album, loads of lush strings, more laid back loungy, some funk and soul elements to it, behind his crooner lyrics. There's elements of Last Shadow Puppets in the vibe and use of strings.

I agree that many of these songs might not translate to a stadium, would be better at a 1-2k seat indoor venue, not sure they could really get the strings mixed right in a stadium. I'd guess they will ne juxtapositioned between the bangers to give them and the fans a laid back breather
Last edited: Oct 21, 2022

UgoAfro said:
Wonder how much of the new stuff they'll play? Didn't play much ( or anything?) from Tranquility Base Hotel and Casino at Reading as the songs won't really fit those massive gigs.

Haven't heard it much but I'm looking forward to hearing it and seeing them evolve. The people criticising just want them to repeat 'whatever you say I am.....' or 'AM' (depending on your age!) forever.
Click to expand...

I went to their last tour and they played 5 Tranquility Base songs, I'd expect similar, 22 songs and maybe 4 of The Car replacing a couple of Tranquility, one off AM and one off Favourite Worst NIghtmare. Something like that. Something for everyone. 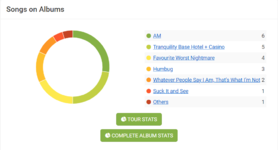 Listened to it today, he still has his way with lyrics, but I just can’t get past the dreary lounge / lift music.

They need to go back to where they came from IMHO

I hadn't listened to AM since the days they played the arena when I photographed them. Just fired them up on Spotify with my stereo amp for a good loud listen

Not my cup of tea! Until one of the later tracks when I thought his vocals shifted totally and he was invoking Freddie murcury