Only 5 minutes in and Truss is doing a very good impersonation of a plank of wood.

She's completely out of her depth.

I think she is doing OK with, admittedly a limited attack from labour. Its going to take some time for starmer to lay taps and criticise her decisions given she hasn't made any yet.

****.. I need to watch this.. since she screwed up about Russia as foreign secretary

Laughing said:
I think she is doing OK with, admittedly a limited attack from labour. Its going to take some time for starmer to lay taps and criticise her decisions given she hasn't made any yet.
Click to expand...

I tend to agree. You can see where Labour are going with this - I think it's a good line of attack.
U

I think she'll be fine for a few weeks. It's when she has to start justify her own decisions and actions that she's going to come unstuck.
L

Can’t watch PMQs, grown adults shouting and acting like a classroom of children.

As a performer she is truly awful - she has managed to make Starmer look energetic and exciting! Other than the hackneyed old 'same old labour' line at the end she really did look like she was floundering. Im not sure if the slow delivery is deliberate but she would be much better advised to speed it up

I now know why I stopped watching/listening to PMQ years ago.. they are a bunch of pricks. If I carried on like they do in a meeting, I'd be sacked.

She simply talks in her robotic monotone voice with her vacant ‘nobody at home’ expression. I certainly don’t think she has been a disaster today at PMQ’s as she hasn’t said too much and the morons behind her have screeched and cheered like schoolchildren. Unlike the last creature in that post she actually answered questions with a yes or no albeit strategically her unwillingness to consider a windfall task will prove a critical mistake. Labour certainly up to now have not appeared to rattle her.
N

Labour's line of questioning is there to shame them. Their decision to make people pay while the providers are raking in ridiculous profits is indefensible but you can't shame someone that is shameless.

lack of personality will show as a weakness at PMQ ... however this will not make her a bad leader ... 90% of her work will be done in the cabinet office ... lets see.

Just caught up on it - See she's lying already and tax rises and that she doesn't want it at the same level as France who, for the 3rd year running have attracted more foreign investment than any other European country.
E

And she is going to need to get inflation down otherwise their base of middle England and home owners will vote elsewhere
Last edited: Sep 7, 2022

Starmer aimed for one point and that was who is paying for the prize cap freeze? Ordinary people, or energy companies with £170bn profits BEYOND what they predicated. It's staggering Truss will not even look at a Windfall Tax on those profits.

Truss is an ultra-libertarian these days. All hail to the market and allow big corporations and mega rich individuals to do as they please. She never use to be ultra-libertarian of course. She has changed her political views massively at least twice. It's all about her and not really about anyone else.

First massive whopper, straight from the Bozo playbook, stating Labour didn't invest in Nuclear. In 2006 they signed off on a new power station but in 2010 this was cut by Dave and Gideon "as it wouldn't be ready until 2021". So.......it's started.

Expect Hoyle to demand she corrects her slip..... obviously......

See the braying sycophantic mob are back, fresh from their jollies....... 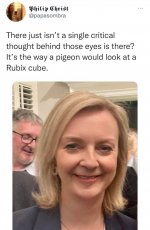 PMQs is certainly going to look different going forward. Up against Johnson it was all about "brand Boris" - he wasn't an ideologue at all hence frequent personal questions, integrity being questioned etc.

Truss doesn't have a personality, as far as I can tell. She is an ideologue though. I think we'll effectively start to see the two big party ideologies start to play out more across this premiership (seeds of that being sown today with the questioning of source of funding for energy).

In my opinion this actually sets Starmer a bigger challenge than before. Whilst it was fairly easy to ridicule Johnson (his lack of integrity ultimately led to his downfall) it may be a tougher task to suggest, on purely ideological terms that Labours approach is "right" and the Conservatives is "wrong". Any opposition policies at this stage are likely to be stolen/enhanced as well.

changingman said:
She is an ideologue though
Click to expand...

I don't think anyone who has changed their stance on anything and everything throughout their political career can be accurately described as an "ideologue"?