I'm travelling back to the UK this weekend so will struggle to see any of these games or the Championship games sadly (but will be at the Watford game the second weekend as compensation!) but what are everyone's predictions for the route to the Super Bowl?

I'm going for the following;

I've let my heart rule my head a bit with KC and would love to see the 49ers take the NFC, but can't see them beating an Eagles team with home field advantage and a fit Jalen Hurts. Just adding in thst I had a dream that said Cowboys and Bills Super Bowl, so that's both of those teams jinxed.
N

Can’t disagree with much of that goalscrounger, other than I think the Bengals will upset the Chiefs.
Fly Eagles Fly!
Last edited: Jan 20, 2023

I think the 49ers will make the Super Bowl.

The Ruthsayer said:
Can’t disagree with much of that goalscrounger, other than I think the Bengals will upset the Chiefs.
Fly Eagles Fly!
Click to expand...

That's the bit where my heart rules my head! I'm hoping the fact that the Bengals have had recent (post season and regular season) success over the Chiefs will spur KC on this time.

Seriously though it’s going to be tough and v emotional hopefully josh pulls us through.
E

Bills time! And America will love this ending

There's always a shock/upset somewhere. So I'm not even going to try to predict the eventual SB winner.

Wouldn't be surprised with a Jags win. They're on a great run and if KC are a bit complacent and looking ahead to the Conference game there could be an upset.

Nano said:
Wouldn't be surprised with a Jags win. They're on a great run and if KC are a bit complacent and looking ahead to the Conference game there could be an upset.

That last line may be triggering for this board

Bills time! And America will love this ending
Click to expand...

The perfect final. With the Eagles flying high!

Nano said:
Wouldn't be surprised with a Jags win. They're on a great run and if KC are a bit complacent and looking ahead to the Conference game there could be an upset. 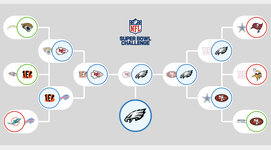 Having done the sky sports prediction and not been perfect in the wild card round but lucked out on the matchups. Going to stick with the remaining predictions

Hard not to go along with your predictions Goalscrounger, but I think the AFC title game should see the Bills and Chiefs again. The game which has the hallmarks of maybe a road win is the Niners- Dallas game. It all depends on whether or not Purdy doesn't get too overawed by the occasion. For that matter I'm going for the Boys to beat the Niners-- hope I'm wrong. If Dallas does get lucky and beat the Niners then I can see a really tight game in Philly with Dallas winning on the road. Regardless, Mahones is just too good for the wannabees.

The big one for me is tomorrow, if we can get past cinci I think we’ll make the super bowl. As don’t forget we have beaten that KC hoodoo this season and last years game was so tight we really should have won with that last gasp play. I think they miss hill’s pace to complement Kelcee.

I watched the game and Before the Hamlin incident cinci looked really good and we’re in the lead. But at orchard park things might be different. But a huge game nonetheless.

This could be key as everyone talks about our offence and 17 and 14 and josh is special but the D has been McDermott base since he arrived and that is still strong. Shame von miller is out though as he was basically bought to stop mahomes in the playoffs.

If anyone wonders about the buffalo story this is good insight.