This is an interview with a terrific character, much missed, home and away regular, for years and years. The one and only Frankie Bointon aka The Bam. Taken from Fly Me To The Moon on the occasion of Bam Bam's 60th birthday.
The words below are exactly what was published in the fanzine so any inaccuracies are from the original transcript. I remember the Bam pushed in his chariot by Chalkie at his comeback match the crushing end of season defeat of Man City at the Riverside.


Boro Legend BAM BAM is 60 today. He’s been very ill of late but is determined to make the game today and celebrate his birthday with a Boro win. It is also his nephew Connor’s 14th birthday. Reckoned to be a Spurs fan he will have split allegiances today but with a new Boro season ticket he will soon grow out of them and back into the Boro fold.

It was back in the early stages of last season that Bam almost choked to death while eating panaculty. He was dead for 8 minutes during which time the oxygen wasn’t getting to his brain.

It is a long, slow and painful road to recovery for the self-confessed “24 hour man.” Frank’s had prolonged treatment in two hospitals but he is a fighter and determined to eventually walk to his season ticket seat in the Riverside. 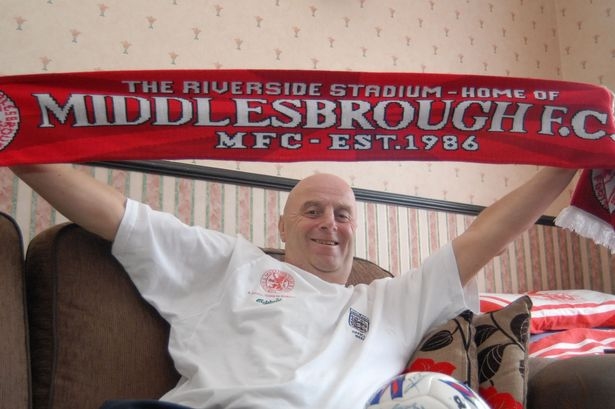 Frankie Bointon earned his nickname The Bam 40 years ago whilst shouting for Bacardi in the Speakeasy nightclub and it is a name that has certainly stuck. His wife Diane was the first barmaid for the Ayresome Angels in Woodlands Road before becoming a football widow.

Fly: What was your first match?

BB: I was taken by my uncle because my dad was killed while I was on the way in 1948. He served on HMS Pepperpot the most torpedoed boat in the war but was killed in an accident at the steel works.

I remember my uncle took me to see Mannion but I can’t remember the game but I do remember us playing Leicester City in about 1956 we got beat 3-1 at home. I also remember the first floodlit game and I was in the old Bob End and I was right behind the goal and Delapenha scored against Sunderland (I think) there was a big hole in the side of the net and it was disallowed. After that they always checked the nets.

I also remember when we beat Derby County 5-0 and Cloughie never got one! That season he got five against Brighton in the first match (9-0) and 4 in the 6-2 win and the goalkeeper was John Hollins brother and he also scored 9 by Harry Gregg, 4 v Doncaster and 5 for Football League v Irish League.

My first season ticket would be in the Bob End after the World Cup in 67. I’ve been going ever since.

Fly: What stands out as the best individual display do you think?

BB: The best performance prior to the Little Fella at Leicester before the League Cup final which was unbelievable, was Hughie McIlmoyle v QPR.

Fly: Why was that so good?

BB: I got there a ten past three we had to work late on the Saturday afternoon. Anyway the lads went to the club and people were coming out ten past three we were two down and Rodney Marsh was sat on the ball. And then Hughie took over, out of this world he was. Big John got 3 and he got 2. We beat them 6-2.We took Hughie off with about quarter of an hour to go because (the late) Dave Clement stuck the nut into Hughie and he wasn’t that type of bloke. He was 5ft 10” of sheer genius in the air wasn’t he?

Fly: He must have been a bit like Archie Stephens in a way, similar height and similar leap.

BB: Absolutely. With Archie having been a non league player first Brucie used to allow him and Hammy a few pints on a Friday night. He was of the old brigade, Bruce learned through Cloughie. Yes, we’ve had some characters.

Obviously the Little Fella definitely the best player in our time. I’ll never forget the way he ran the game at Leicester when we hammered them before the final. Give him his due O’Neill put someone on him in the final.

Fly: If we hadn’t played that game the final might have been different. We’ve seen a few finals though haven’t we?

BB: We’ve seen the lot haven’t we? I wouldn’t care one of my fondest was when we beat Villa in the ZDS Final. I said to Chalky we’ll draw at home. He went we’ll win 3-1. He said it will go to extra time after we draw but we’ll still go to Wembley and we did. But we never won unfortunately. But we got the one. I know it’s only mickey mouse but what a time..

Fly: And obviously we got to Europe.

BB: And what a time that was. But I never got a ticket for the away Banik game.

Fly: We were both in the same boat.

BB: I’d never been let down before, why then I don’t know.

Fly: There are not many people who realise that you used to play football.

BB: I captained Brambles Farm team and I picked the team. I was a little Billy Bremner. Back in 1958.

I had trials at the Boro, Chelsea, Burnley I could play but I was always a “character.”

Fly: Is it right that you once had a run-in with Harold Shepherdson which ended your trial at Boro?

But I had a plank and scaffold boards set out at Hutton Road. So when he walked in I expected him to stand on the scaffold board and the bucket of water would go over him but it never worked so I threw it over him.. Never mind we all have our laughs.

Fly: There was a season where you didn’t go home and away to the Boro every week wasn’t there?

BB: I was a trainer at Whitby Town for Tony Lee. But I never missed a home or away game if Whitby didn’t have a game. I was the spot the player man. I could name a player like that and obviously my patter in the dressing room lifted the players. Some people haven’t got it they come in blowing their heads off players don’t want to hear that.

Fly: Any other games that stand out from the Ayresome days?

BB: The game against Newcastle to stay up. Bairdy shouted at the end, “Get in 4-1, you Geordie b***ds.” We had to win and we did. That was some game. And look at the Chelsea play off game. I was down at Maidenhead and in all the papers since Thursday, Bates wasn’t saying we welcome Middlesbrough. He said we got beat on a deliberately watered down a pitch. Any footballer worth his salt would rather play on that at the end of the season. Ayresome Park was one of the great pitches.

Terrible the riot after the match. A friend of mine’s young un was thrown over the fence. We got left three tickets at the side and we were celebrating at the end of the match, “Get In.” I looked about, dear me, I said we’ll get minced. I said get us out of here and behind the goal, to the steward. He said no, I can’t. I said if you don’t get us out you’ll be minced. Took some bottle that. Anyway he opened the gate and we got back behind the goal.

Fly: So, you’ll be 60 on match day v Spurs. Will you be able to get to the match do you think?

BB: The lads said you are going. You are not getting a season ticket and not going.

Fly: So does that mean we’ll be getting another 8-1 like your comeback match at the end of last season?

BB: Hey what about that. If we get a repeat I’ll retire then.

But please thank all the lads for everything, especially the away lads. I’ve had some great times with them, lads from all over the country. They all wrote cards for me when I was in hospital thank them very much.
Reactions: swordtrombonefish, equaliser and borgelite