Article Gallery (2)
In the wake of Britain’s mega successful Paralympics in Tokyo, Paddy Cronesberry Chair of MDSA(Middlesbrough Disabled Supporters Association) and Chris Joseph(Founder of the Middlesbrough Supporters Forum) are getting ready for sport closer to home. They have “shaken stumps” on a four figure deal that sees Chris’s Teesside based “HOOK Advertising” agency featured on the “Wheelies” minibus for the Boro’s new football season. 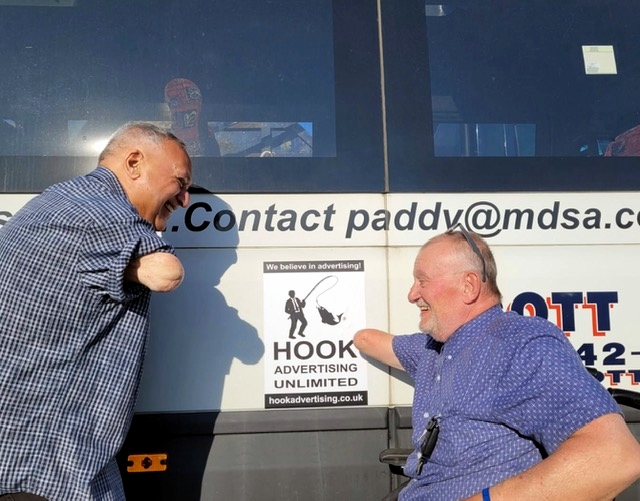 Paddy Cronesberry MBE co-founded the MDSA in 1990, and Chris and Paddy have followed the Boro for as long as they can remember. The MDSA minibus travelled all round Europe in Boro’s golden adventure.

“We lost our arms to a starship trooper called Juninho!” said the pair, “so we thought we’d give each other a helping hand!”

“Paddy hopes to raise enough funds this year to replace the MDSA minibus with a new state of the art customised vehicle” said Chris, “and every donation to the MDSA will help disabled Boro fans follow their dreams and our team on its travels.”

Paddy added “Any additional support by local businesses will be gratefully received.”