The face of advercity bandwagon is rolling on brilliantly & gathering pace, up to the Newport game we had played 16 league games & suffered 2 defeats, one at home & one away, along with 4 league cup matches & one defeat, which was against a team in a higher league & in to extra time
This from the same 12 players who had no friendlies, summer practise matches, just training in local parks with jumpers as goal posts

Bruce couldnt ask for any more from his players

With the clock ticking down to the 90 minute mark our 1st ever visit to Somerton Park was looking as it was going to finish goalless, with points shared, but, the mighty Boro & Boro legend, Mogga, had other ideas

Boro had won a corner & with practically the last kick of the match Stuart Ripley floated a corner in to the Newport penalty box, our iconic captain 'Tony Mowbray' rose the highest to head the ball in the net & score the vital winner, goooaaaaalllllll

Within seconds the ref blows the final whistle, full time, the mighty Boro take all three points & the Boro fans, with the 5 hour journey, 300 miles back to Teesside to look forward to, are ecstatic

SUB
Gary Hamilton - Replaced Alan Kernaghan in the 2nd half 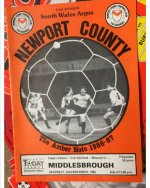