No strikers.. what would Mowbray do? 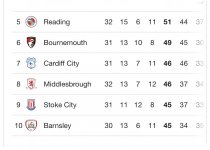 Kamara was a striker.

erimus86 said:
Kamara was a striker.
Click to expand...

He was all dre beats and Instagram selfies
B

Wasn't Kamara a striker who headed crosses in very well?

God knows what we're going to do about the striker situation. Was gutted when Fletcher went off and sounds like a repeat of what happened that just taken him months to get over ..

Also, I know the table shows us as still having a chance of catching 5th place/6th .. but after that display tonight and our home form in general, I don't expect us to finish anywhere near those positions now. We have been hammered at home by some of the worst sides in the league at home. Games we all expected three points from went t1ts up. Birmingham, Rotherham, tonight, and the list goes on ..

To lose to those lot tonight 1 - 3 was shocking. Awful display. They hadn't scored in God knows how many games??? I just don't get it, why we do this. Perform like we did at the weekend and get a brilliant result like that then back home let in three goals in the first half vs a side that hadn't scored in eons, and it felt like they were gonna grab even more.

I just don't get it me, but we're not good enough to finish top-six this season. Just being honest. Imagine we somehow miraculously did and won the playoffs?? This team would get so badly beaten in PL it would be unpleasant to see

. I think there's some work to do yet before we can be in the mix to go up. Losing home games as we have been, you don't get promoted with form like ours. You need to win your home games.

Also, our keeper's sh1te and needs tossing out the club asap. I hope we find a decent enough replacement when the season ends. Gutted we paid 3 million for Akpom as well. We'll never get rid of him, another load of money down the drain ffs.
You must log in or register to reply here.
Share:
Facebook Twitter Reddit Pinterest Tumblr WhatsApp Email Share Link
Top
X