Racist abuse of stewards and attacking police
Will they get any sanction?

I read only UK based Hungarians were allowed to buy tickets, so the offenders should be prosecuted here as we would do with UK citizens.

I have said before on here there is some extreme racism in the EU, but most Brits tend to be unaware.

Lets be honest - UEFA have let a lot of countries get away with this stuff for years.

From time to time I read 'Hungary Today' an English Language online news site which I'm convinced is Government run.

Here's an extract from it's match report.

"As a matter of fact, the match wasn’t free of minor disruptions either. First, some English fans booed the Hungarian national anthem, while the few Hungarians present did so with kneeling English players. Then, in the opening minutes of the game, one Hungarian fan reportedly made racist insults towards one of the stewards. In response, police officers went to the sector to arrest the misbehaving fan. However, other fans did not let them through and clashed with the policemen. After a short fight, with some Polish fans also joining in (who arrived to support Hungary), police were apparently forced to leave the sector but the troublemaker was taken into custody."
Z

Wiseman_Vaughn said:
Lets be honest - UEFA have let a lot of countries get away with this stuff for years.
Click to expand...

Not least the English

They are not "football hooligans" - they are organised and their reach goes to the top of Hungarian society. The Hungarian President is an homophobic, anti-imigration, nationalist, far - right , racist - who effectively fuels their behaviour and violence, not just at football matches. 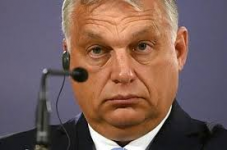 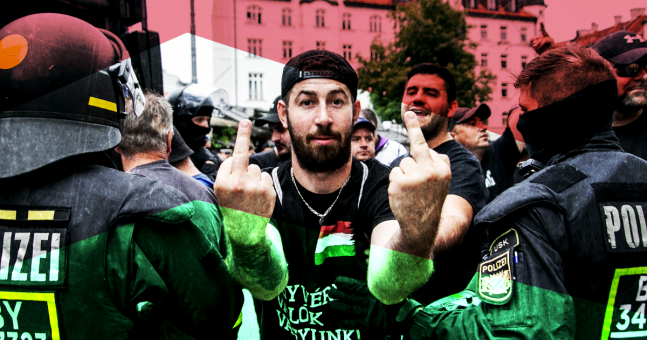 The Carpathian Brigade: Who are Hungary's black-shirted ultras? | JOE.co.uk

Hungary's black-shirted ultras, the Carpathian Brigade, are loud and intimidating, but who are they? Tomasz Mortimer explains their roots and their support.

Hungary's black-shirted ultras are loud and intimidating, but who are they?​

The racist abuse that echoed around the Puskas Stadium during Hungary's game against England in September was a depressingly familiar sound. When the Eastern European nation hosted France in that tense 1-1 draw at the European Championships in June, that game was also marred by monkey chants directed towards French strikers Kylian Mbappe and Karim Benzema.

In the previous games against Portugal, a section of the Hungarian crowd chanted, "Cristiano Ronaldo, homosexual" while a group of fans in black were pictured with a banner that read, "Anti LMBTQ" [LGBTQ+ in Hungarian].

In the final game of the group, away in Germany, some Hungarian fans displayed a banner that read, "This is our fairytale for life," with a cartoon showing a woman and a man kissing. This seemed to be an endorsement of the Hungarian government’s recently passed law that censored the portrayal of LGBTQ+ relationships for under-18s in the media and at school.

Their fans’ discriminatory behaviour during the summer earned Hungary a two-match stadium ban from UEFA, while FIFA imposed a one-match ban after the abuse Raheem Sterling and Jude Bellingham suffered last month.

The latter was in place during Hungary’s 1-0 loss to Albania on Saturday. So, tonight at Wembley, hordes of Hungarian fans will be there for the match against England - most likely with racist and homophobic banners raised above their heads.

Black-shirted Hungary fans during a match against England at the Puskas Stadium on September 02, 2021 in Budapest. (Photo by Michael Regan/Getty Images)

But not every Hungary fan shares these views. The problems stem from the Carpathian Brigade - the black-shirted ultras commonly seen behind the goal at one end of the Puskas Stadium.

The Carpathian Brigade are an umbrella group of Hungary’s most hardcore football fans, drawn from different clubs within Budapest and across the country. It was formed in 2009.

“The group exists as a government-backed attempt at uniting club hooligans to influence them not to be too radical, and only endorse central government messages,” Csaba Toth, a journalist for the independent Hungarian news website, Azonnali, told me.
“They are told not to express neo-Nazi sentiment. Instead, their fervour is channelled towards more subtle government propaganda lines like homophobia, transphobia and anti-Black Lives Matter.”

Just like many ultra groups across Europe, Hungary’s have always had neo-Nazi leanings. Since the 1950s parts of Hungarian fandom has been associated with fascism, taking root initially at the nation's most popular club Ferencvaros, and spreading to many others.

White power tattoos and banners are still common at domestic games throughout Hungary, as are Nazi salutes. An "Aryangreen" banner is seen at almost every game that Ferencvaros play - a reference to the Aryan race and the team's colours. Their ultra fans, known as the Green Monsters, are heavily involved in the Carpathian Brigade.

“Football fan society is basically nationalist in Hungary, and we are proud of that,” a representative of the neo-Nazi group Legio Hungaria told Bellingcat in September. 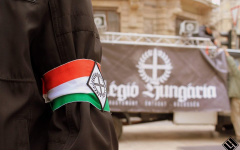 The Carpathian Brigade though, was supposed to be different, it was founded to bring everyone together - the left, liberals and the right alike. “It's not a homogenous mass of people,” Gergely Marosi, a sports journalism lecturer a Budapest university tells me.
“Ultras, in general, are right/far-right in the region, due to historical reasons - there are also regular fans who go there for the atmosphere, it's a mix.” 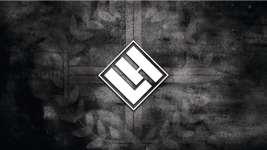 Initially, there was some resistance to the Carpathian Brigade from supporters of the national team due to their government links. It wasn't until about eight years ago, when Hungary faced bitter rivals Romania in two successive games that the group consolidated their position within Hungarian football.

Hungary went on to draw that day thanks to a late equaliser, and later qualified for the Euros - their first major tournament since 1986. The bond that was forged during those matches in Romania laid the foundations for what the Carpathian Brigade are today.

“The qualifications for the European Championships in 2016 and 2020 means that national team games are now very popular events,” says Marosi. “This is a huge change from the late 80s, 90s and early 2000s.

“Since 2008, more and more fans are going to watch the national team and attendance has risen steeply. I believe some of this is due to the Carpathian Brigade and to the results getting better.” 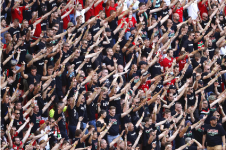 But the Carpathian Brigade has become a victim of its own success. Built on the promise of bringing everyone together, it has created a kinship among the worst kind of football fans in Hungary. The confidence shown by the group over the past year suggests it’s becoming difficult to control.

The bar for what is acceptable in Hungary is different than it is in western Europe. On the Carpathian Brigade’s Facebook page in June, they warned fans that they needed to cover up their tattoos as they might be incompatible with local laws that forbid the showcasing of Nazi symbols. 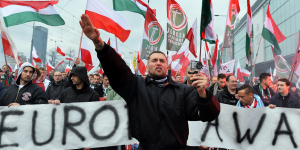 The Hungarian government publicly says it isn’t troubled by what the Carpathian Brigade stands for, and both sides continue to back each other on the terraces and in parliament.

When defending Hungary fans booing the knee against Ireland in June, Viktor Orban said, “Hungarians only kneel before God, homeland and when they propose to their love". A Hungarian flag with the words, 'We only kneel for God' was seen in the streets of Budapest before the England game last month.

Declan Rice and Harry Maguire take a knee in support of the Black Lives Matter anti-racism movement during the 2022 FIFA World Cup Qualifier match between Hungary and England on September 02, 2021. (Photo by Michael Regan/Getty Images)

In the wake of the racist abuse during the England game last month, Hungary’s foreign minister, Peter Szijjarto, posted on Facebook criticising England players for "complaining" about a hostile atmosphere after boos were heard from their fans during the singing of Italy's national anthem in the Euro 2020 final.

“The government doesn't criticise them because it would risk the Carpathian Brigade falling apart, and a less controllable far-right scene would reappear,” explains Toth.

But that far-right scene is starting to emerge. During the Black Lives Matter movement, there was an explosion of white nationalism across the Hungarian league. 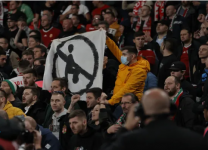 In July 2020, Cypriot international Fanos Katelaris refused to play for Zalaegerszeg when their fans racially abused three Fehervar players in the pre-match warm-up. The infamous Aryangreen flag returned to the stands at Ferencvaros, while White Lives Matter and anti-knee banners were unfurled at grounds around the country.

These banners have also made their way to national team games, as have the racist chants that were absent for over a decade.
Hungary’s ultra heritage dates back decades, yet the movement has never had the collective power it holds today. Just because no outright neo-Nazi symbols are displayed at national team games doesn’t mean the sentiment doesn’t exist.

Under the current Hungarian government, the Carpathian Brigade is becoming increasingly bold and has built alliances that once seemed unthinkable.

If it continues on this trajectory, it could become an even more destructive force within Hungarian football and the international game. 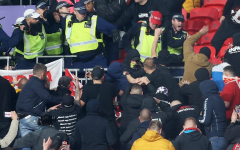 Redwurzel said:
I have said before on here there is some extreme racism in the EU, but most Brits tend to be unaware.
Click to expand...

Yeah, we have enough with our own extreme racism, we don't need that damn EU trying to tell us how to be racist !
Last edited: Oct 14, 2021
T

Hooliganism is like everything else we invent it and ever other country is better at it,than us.

I couldn't understand just how weak and unsupported the police were. They actually got a right battering. Can you imagine Italian police being abused like that by foreign fans. There should have been a lot more and gone in with the big sticks, cracking head and dragging out anyone attacking them.