Boro flashback this day back in 1973 on the 1st September

Last weekend (25th August) the Boro had won their opening game of the season when Alan Foggon bagged the only goal of the game in a 1-0 away at Portsmouth, 7 days on (1st September) we welcomed Fulham to Ayresome Park for the 1st home game of the season & big Jacks home debut in the Boro dugout

A lovely warm saturday afternoon when, hopefully, fingers crsossed the mighty Boro will be too strong for Fulham, contine were we left off last week at Postsmouth & keep the points on Teesside
Come the final whistle as fans streamed out of Ayresome Park

Same old, same old, nothing will change, muttered some of the older fans as they made their way home after seeing the Boro lose 2-0 to Fulham

Little did anyone know after the Fulahm game what the season we behold, the only home defeat of an unforgettable, fantastic, never ever forget, remarkable, so glad I was old enough to appreciate, season
After the game big Jack was not happy at all & not on for standing for anything below the standards he was about to set, he was so angry in the dressing room & told his players in no uncertain way, 'It's my way from now on' 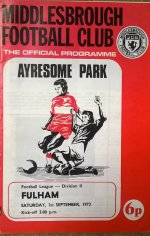 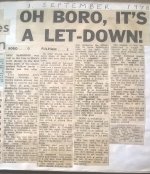 I remember the game we were unlucky I seem to remember.

Borothruandthru said:
I remember the game we were unlucky I seem to remember.
Click to expand...