They should have gone for Poch as Fergie recommended.
I can’t see this new manager lasting long. His first few signings such as Martinez doesn’t bode well.
They really are a joke club.

Interesting they lined up 4-2-3-1, same formation as Karaka, but we're absolutely all over the place in every department.
Shows what buying players to suit the system does.....not just sticking players in because they cost a few quid.
Feel a little sympathy for Ten Haag as he is now realising what a sh*t squad the last 3-4 managers built. At least a three year rebuild, will he be given time? Who cares

And to compound matters there is Ronaldo sulking in the wings (or on the bench).......

Duffman said:
Harry Maguire is such a liability - so poor at Man Utd for some time now but still almost certain to start for England under Southgate’s ‘loyalty’ mentality. He will single-handily prevent us from winning any tournament at international level.
Click to expand...

Though he was Englands best defender and in the team of the tournament when England reached their first final in over 50 years....I do agree his club form since then has been unbelievably bad though.

Glover_elbow said:
Don't laugh too much we are becoming the championship equivalent no matter what we try we cant get promotion
Click to expand...

That's what I was thinking, talking to my mate who's a Utd fan .. best not find it too amusing, not like we're doing anything right either. Haaa

What a sickener it must be for Utd fans today watching City and Haaland get that double, who's going to absolutely romp this league and cost what, like 30 million less than what Utd paid for Maguire?? Christ

They aren't going to move on and improve with the likes of Maguire, Fred and McTominay starting and building players around them as Roy Keane was saying today and has repeatedly been saying for far too long now, along with the other pundits. The likes of Neville do their best to keep the faith in them players but he knows they're not good enough and it is nice to have Keane alongside him to say exactly how it is. I'd love to hear what he says in private about Maguire and co .. Maguire should not even be captain of that side.

I thought Ten Hag would have changed that, getting rid of Maguire is going to be a nightmare for Utd as well. They're never going to make anything near back what they paid for him.

They're in a complete state. Booed off at half-time, Ronaldo sulking stinking the place out and as the coverage was going news was breaking that they have put in a bid for Arnautovic to solve the Ronaldo problem .. how far have they fallen! like that is going to improve much! They're struggling everywhere and it is going to take years for them to get back to where they want to be .. but whoever it is that will put in the work will need time and I bet they don't give it to Ten Hag.

Just not good enough as the pundits put it ... nothing has changed and they're struggling to make the signings they need,

Have to give credit to Brighton though, obviously. Graham Potter doing an outstanding job there and that is after losing two huge players during the Summer ... I didn't expect Utd to lose but expected at least a bit of improvement and sharpness/shape on the pitch and it looks like nothing has changed at all.

At least we aren't the only club in the country going through all this frustrating uncertainty!

United need to spend about a billion quid or unearth the best young players in the world in about 7 positions.

De Gea, Eriksen, Fernandes and Elanga are the only ones worth keeping. They have needed a massive overhaul for years, and it gets promised with every new manager but it never comes. This new defender looks rank, Varane is past it horrible signing. Fred isn't half bad, not good enough for Man U but with McTominay they're shocking together them two. They'll be lucky to get top 6 this year with that team/squad - They brought some young lads on and have a couple more, if they're any good they might stand a chance but they need 2,3 experienced - not past it! - serious footballers in their XI asap.

VestasBoro said:
Varane is past it horrible signing.
Click to expand...

Marry him then.
He is past his best, which is why he was allowed to leave. He was poor last year and him, Maguire and Martinez are all not fit to walk in the shadows of Vidic, Rio, Pallister, Stam etc
They should be signing the breakthrough talents before they win their trophies elsewhere, like they used to.

I'd say Varane is their only defender who has played at the level you would think they see themselves. It is hard to judge on any of their qualities, as a unit and a team they've been awful for a couple of season now and rarely seem to play the same players or formation.

They have signed 'breakthrough talents' in the past, but I would say equally they have used their chequebook to sign the biggest and priciest players going on more occasions than most too, Dennis Law, Robson, Pallister, Veron, Ferdinand etc.

They have broken the English transfer record as the buying club 6 times, more than anyone else. 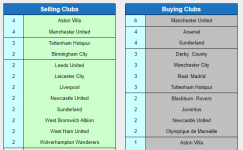 VestasBoro said:
Marry him then.
He is past his best, which is why he was allowed to leave. He was poor last year and him, Maguire and Martinez are all not fit to walk in the shadows of Vidic, Rio, Pallister, Stam etc
They should be signing the breakthrough talents before they win their trophies elsewhere, like they used to.
Click to expand...

Varane is easily their best defender. The problem is Maguire, they keep chopping and changing centre backs to play with him but it never gets any better. Now of course central midfield is disgracefully poor, but maybe, just maybe, the problem at centre half is the player that has consistently played their for the last 3 years

Man Utd really haven't replaced Howard Webb and since he retired they've really struggled, replacing him should be at the top of the managers list.

The_Lizards_Jumpers said:
Man Utd really haven't replaced Howard Webb and since he retired they've really struggled, replacing him should be at the top of the managers list.
Click to expand...

To be fair I think they were lucky at the weekend with some quite 'friendly' decisions. They could have easily had a red and a penalty against them.

Apparently, their bid for Arnautovic was rejected

Cosmonaut said:
Apparently, their bid for Arnautovic was rejected

VestasBoro said:
They have needed a massive overhaul for years, and it gets promised with every new manager but it never comes.
Click to expand...

I'd say the opposite: it comes with every new manager. It's just that, at Man U, if it's not paid off in 18 months, you're out. And another complete overhaul is needed...

I think Man U probably have to go backwards to go forwards. They'll say they're committed to the new guy now, but he'll do well to last 18 months. How long did it take SAF to win his first trophy there? He needs that long at least.

If they need to go through a Lee martin, Ralph Milne and Russel Beardsmore again to do it, just do it. Of course, the money men won't allow that..

Arnautovic, bloody hell. I would be disappointed if we were in for him. Not sure how, when or if they will get back top 4. Top players dont seem interested anymore and their fans, probably like ours in fairness are going to be very impatient. Ten Haag also seems to like his dutch based players which never seem to do well…..oh, hang on.

starplayer said:
dutch based players which never seem to do well…..oh, hang on.
Click to expand...

So let’s not right off Dutch based players just yet.

So let’s not right off Dutch based players just yet.
Click to expand...