Article Gallery (1)
Redcar’s German star Erik Riss has warned his teammates that they must be on their game to defeat a strong Plymouth side this Friday at the Ecco Arena, 19:30 start.

The double World Longtrack champion knows his side need to be on the top of their game, “I think it’s going to be a battle of the heat leaders, Plymouth have a strong top 3. I think me, Charles (Wright) and Lewis (Kerr) need to beat their top riders to take the pressure off the rest of our team. If we can do our jobs and beat our opposite numbers then things should go well on Friday.”

Riss, who doubles up with the Ipswich Witches in the SGB Premiership is happy with his start to the season, especially after he fell below his high standards last season, “I’m really happy with my start to the season in the UK, I have scored well for Redcar and Ipswich, I have scored double figures for both of my UK clubs. This season has started much better than 2021. I always knew that it wasn’t me as you don’t forget how to ride a bike but my engines did not combine well with the new tyres and that was a problem. After getting some new equipment I have now solved the problem and things have started well.”

The German star also had some kind words for the Bears reserve pairing, “I have been really impressed with Jason (Edwards) and Jordan (Jenkins). I watched them both on press day, they are both really skilled on the bike and they have a really nice riding style. Both of them did really well against Newcastle but I believe Plymouth will be a harder test for the reserves and us as a team.”

The Bears are at full strength for the meeting whilst the Gladiators have brought in Chris Harris to guest in place of the injured Edward Kennett. Plymouth have assembled a strong looking septet ahead of the new season with Hans Andersen captaining the side, Andersen is joined by former Bears Ben Barker and Michael Palm-Toft whilst they have one of the early season stars in Dan Gilkes who scored 16 points from reserve on Tuesday in the Gladiators defeat to Poole.

The Gladiators will be hoping their league campaign starts on the first whistle after they were dumped out of the KO Cup by the reigning champions, Poole.

Bears fans are also reminded that Easter egg donations can be made to the Speedway office ahead of Redcar’s visit to James Cook hospital. For whatever reason, children may wake up over Easter without any gifts or presents. Bears fans have donated generously over a number of years and we hope you can help out again in 2022! 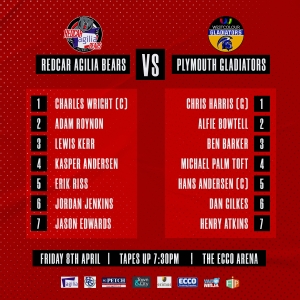