Article Gallery (4)
Last autumn I was given two old Boro postcards to look over by a fellow volunteer archaeologist Jeremy Gard to see if I could find out any details about them. Questions I was asked included was the person called Walter writing on the back of one postcard actually pictured in the Ayresome action scene on the front? Was he a Boro player? What was the link to the second postcard sent to the same address on the reverse? Also, why did the action shot seem to depict an opposition goal or could Boro have actually taken to the field wearing away stripes?

It would turn out to be a fascinating journey back over one hundred years to the start of the 20th century and thanks to three local experts I was able to piece together a bit of a story that gives us an insight into being a Boro fan in Edwardian Middlesbrough. 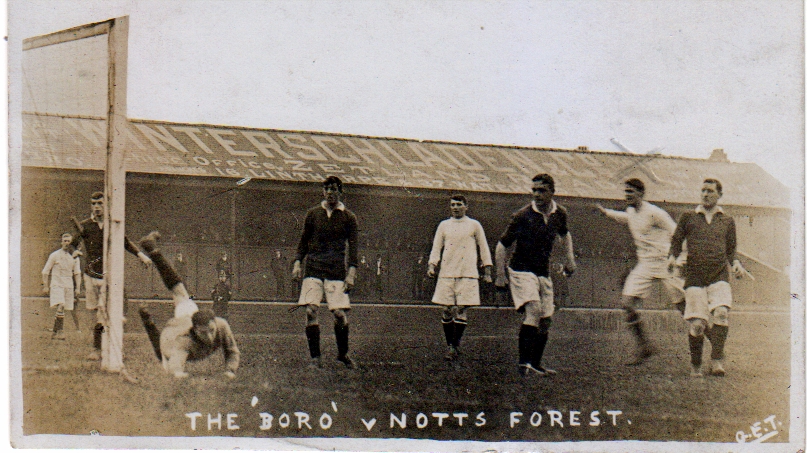 The two postcards are franked 1909 and 1910, so we are zooming in to the early years of Ayresome Park, opened in 1903 as a state of the art football stadium. So, in other words it would be like being at the Riverside at the coming to the turn of this century. Except there was one relic of earlier days because in the background of the action shot titled Boro v Notts Forest (see even in 1909 they were getting Nottm Forest's name wrong) is the old main stand from the former Linthorpe Road ground re-erected at Ayresome Park opposite the curved roof of the North Stand.

Historian Paul Menzies has recently unearthed press cuttings showing that a decade later people were complaining about the old grandstand as being inadequate and Northern League standard. The former Northern League stand was replaced between the wars for the South Stand that will be remembered by many opposite the players’ tunnel and harbouring the arch critics of the Boro chicken run paddock. Incidentally, when I showed him the postcard, Boro historian and statistician Shaun Wilson was thrilled as it was only the second time he had seen a picture of the old stand.

I sent the postcards to Middlesbrough historian Dr Tosh Warwick of Heritage Unlocked to see what he could find out. He suspected that the player portrait shot on the second card was of Andy Aitken, a player/manager of Boro. Shaun Wilson was able to confirm this. Andy was a bit of a star of his day, a Scottish centre half, signed from Newcastle United for whom he had won a League championship in 1904-05 and appearing in two Cup Finals, both defeats. Andy would appear 79 times for us between 1906 and 1909.

This meant that the second card was already old when sent, as Andy had left for Leicester Fosse by 1910 when it was sent. But not the first card, Tosh worked out that it was sent exactly a week after the Boro v Forest game and he also discovered who sent the cards. 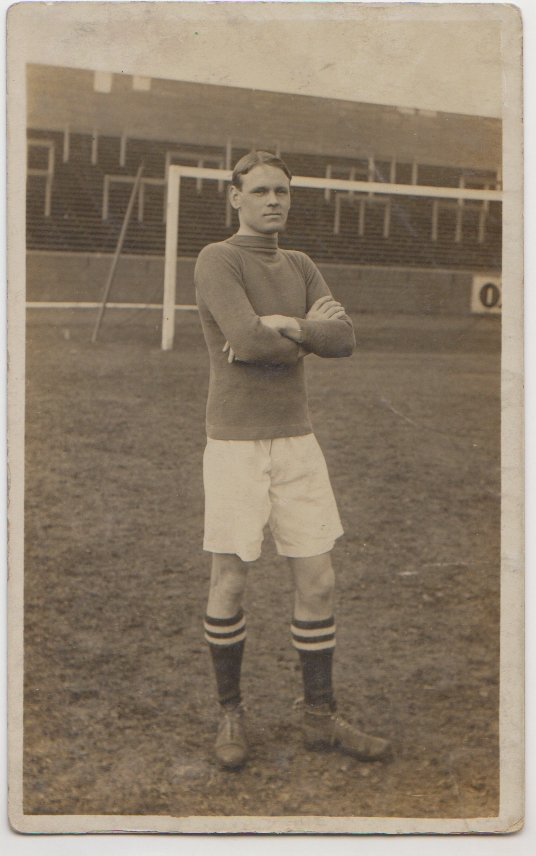 Tosh had a look through the census returns for Darlington and this is what he found out.

“The Walter would appear to be Walter Thorpe (referenced in the other postcard) and Boro played Forest on the previous Saturday (6th) winning 2-1.”

So, who exactly was Walter Thorpe?

On the census Walter Thorpe was recorded as an ironworker, an iron planer to be precise and he was said to be boarding in Darlington. Therefore he was sending a postcard to his landlady. 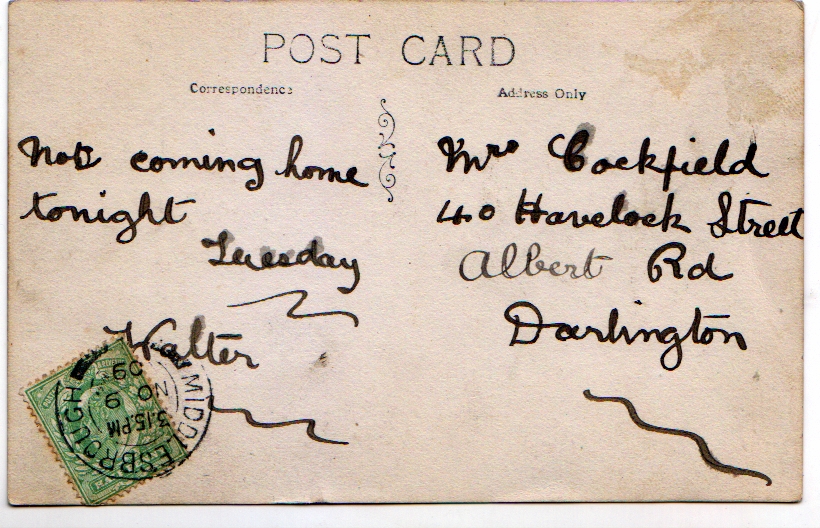 How common were Boro postcards I wondered. I asked Boro fan, keen collector and memorabilia expert Harry Greenmon of Boro Supporters’ Club 2020 if he could shed any further light on this. 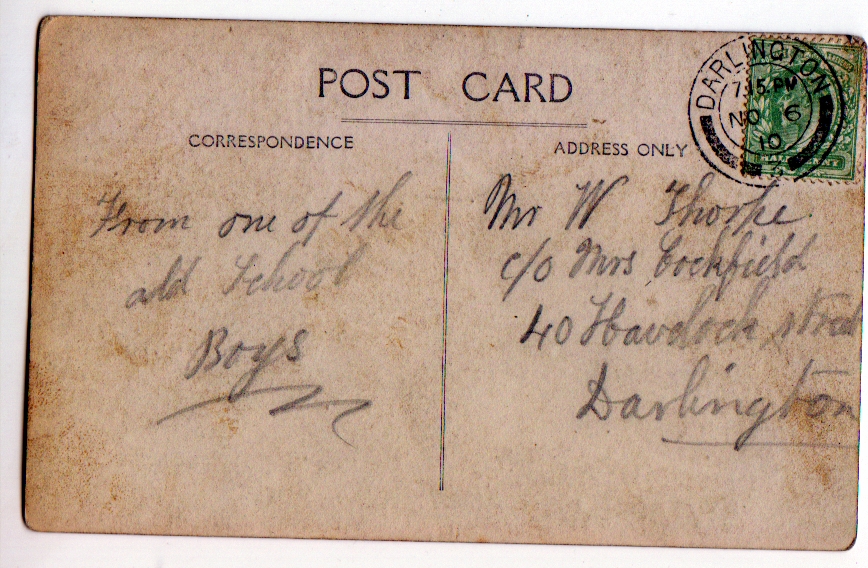 “I have player postcards for all seasons 1905-1938,” Harry replied. “So presumably they were produced each year by various photographers. Also produced in different formats, portrait, full length and in civvies. Some years they were produced in all 3 formats. Between the 2 wars they were in the main produced by Simpson Photo. There was normally a team or squad postcard produced each year as well. Match action shots are not that common and don't appear after WW1.” Harry admitted he had never seen that particular action postcard before nor any depicting Nottingham Forest.

I emailed again and asked Harry where fans might be able to buy Boro postcards.

“I don't know how and where they were sold apart from that some were available from Forshaws the tobacconists following the 1926/7 season.”

I remember Forshaws on Albert Road in the old Cleveland Centre, and my dad tells me that before that it was situated in Wilson Street. They used to print Boro fixture cards. Anyone with memories of Ayresome Park will probably recall the sights and smells of the place; Boro and piped tobacco were very much an item.

So, what about that incredible message. Imagine that sending a postcard in the afternoon to tell your landlady I won’t be home tonight. Jeremy Gard, who found the postcards was intrigued by this.

Harry says,” There were up to six post deliveries a day in those days.” So in the days before most households had phones, you could send a postcard with a message on it and rely on it getting there in a few hours time. It would be far cheaper than a telegram and while not as immediate as the new-fangled phone calls it would serve many of the purposes of sending an email or text message.

From a quick search online I found a blog by Pat Cryer of her mother’s memories on the early years of the twentieth century at www.1900s.org.uk

Pat’s mother recalled that you would post a letter on a morning and look to receive a reply that same evening. The last post could be as late as 9.30pm.

Who would have guessed that two postcards sent from Middlesbrough to Darlington would unfurl so much history.